Before and After Marriage BEFORE - You take my breath away.
AFTER - I feel like I'm suffocating.

BEFORE - She says she loves the way I take control of a situation.
AFTER - She called me a controlling, manipulative egomaniac.

BEFORE - Is that all you're having?
AFTER - Maybe you should have just a salad, Honey.

BEFORE - We agree on everything.
AFTER - Doesn't she have a mind of her own?

BEFORE - Victoria's Secret
AFTER - Fruit-of-the-Loom

BEFORE - I love a woman with curves.
AFTER - I never said you were fat. 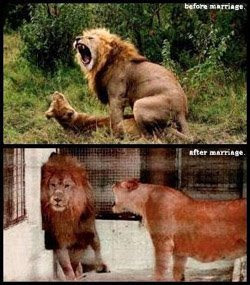 BEFORE - Time stood still.
AFTER - This relationship is going nowhere.

BEFORE - You look so seductive in black.
AFTER - Your clothes are so depressing.

BEFORE - I can hardly believe we found each other.
AFTER - I can't believe I ended up with someone like you.

BEFORE - Passion
AFTER - Good Night

BEFORE - Once upon a time
AFTER - The end
Email ThisBlogThis!Share to TwitterShare to FacebookShare to Pinterest
Labels: funny, jokes