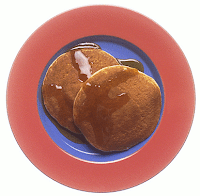 I recently made a batch of pancakes for my healthy 14-year-old son, using a mix that was in our pantry. He said that they tasted 'funny,' but ate them anyway. About 10 minutes later, he began having difficulty breathing and his lips began turning purple. I gave him his allergy pill, had him sit on the sofa and told him to relax. He was wheezing while inhaling and exhaling.

My husband, a volunteer Firefighter and EMT, heated up some water, and we had my son lean over the water so the steam could clear his chest and sinuses. Soon, his breathing became more regular and his lips returned to a more normal color. We checked the date on the box of pancake mix and, to my dismay, found it was very outdated. As a reference librarian at an academic institution, I have the ability to search through many research databases. I did just that, and found an article the next day that mentioned a 19-year-old male DYING after eating pancakes made with outdated mix. Apparently, the mold that forms in old pancake mix can be toxic!

When we told our friends about my son's close call, we were surprised at the number of people who mentioned that they should check their own pancake mix since they don't use it often, or they had purchased it some time ago. With so many people shopping at warehouse-type stores and buying large sizes of pancake mix, I hope your readers will take the time to check the expiration date on their boxes.

Anaphylactic reactions involve contact with an antigen that evokes an immune reaction that is harmful. This type of reaction is a rapidly developing immunologic reaction termed a type I hypersensitivity reaction. The antigen complexes with an IgE antibody that is bound to mast cells and basophils in a previously sensitized individual. Upon re-exposure, vasoactive and spasmogenic substances are released that act on vessels and smooth muscle. The reaction can be local or systemic and may be fatal. The authors report the death of a 19-year-old white male who had a history of "multiple allergies," including pets, molds, and penicillin. One morning, he and his friends made pancakes with a packaged mix that had been opened and in the cabinet for approximately 2 years. The friends stopped eating the pancakes because they said that they tasted like "rubbing alcohol." The decedent continued to eat the pancakes and suddenly became short of breath. He was taken to a nearby clinic, where he became unresponsive and died. At autopsy, laryngeal edema and hyperinflated lungs with mucous plugging were identified. Microscopically, edema and numerous degranulating mast cells were identified in the larynx. The smaller airways contained mucus, and findings of chronic asthma were noted. Serum tryptase was elevated at 14.0 ng/ml. The pancake mix was analyzed and found to contain a total mold count of 700/g of mix as follows: Penicillium, Fusarium, Mucor, and Aspergillus. Witness statements indicate that the decedent ate two pancakes; thus he consumed an approximate mold count of 21,000. The decedent had a history of allergies to molds and penicillin, and thus was allergic to the molds in the pancake mix. The authors present this unusual case of anaphylaxis and a review of the literature.